A few weeks ago I tried making some Habanero Pepper Jelly. I got Habanero Pepper sauce. It just wouldn't gel. I also added WAY too many of the little buggers and the stuff is atomic. Today after all the Christmas festivities had died down a bit, we went out for a walk as a great excuse to put on real clothes instead of staying in pajamas all day long. When we got back Jessica had the brilliant idea and suggested I make us some hot chocolate.

When it had heated up a bit I ladled some into a cup for JBL. I didn't have a spoon rest nearby so I licked the bottom of the ladle so as not to make a big mess (hey it's my house, I can lick the ladle if I want) and got lit up. I had washed all my utensils since my last jamming session, but the ladle was still pretty radioactive. However, this sensation reminded me of the Chipotle Chocolate gelato I love to get at Whole Foods. I added about 2 teaspoons of my Habanero Jelly / Sauce to my hot chocolate and it was fantastic!

If you come to visit this winter, ask me and I'll make you a cup of my hot, hot chocolate!
Posted by Peter at 7:52 PM No comments:

Yesterday was Jessica's mother's birthday. We brought lounged around in the morning and took the squirt down to the beach in the afternoon. He's really enjoying the water and will just sit in the surf and play. We all went out to each at Blackwater Grill on St. Simons Island. Great chocolate pound cake and homemade ice cream.

Today is Jessica's birthday. We went out to to the playground to let JBL run around. He still doesn't like slides, but had fun on the swings.

The weather today was kinda hot and very muggy, so we got back in the car for the A/C and drove to both ends of Jekyll looking for a breeze to fly one the kite I got for Jessica. Unfortunately, it was not to be had today. We had one of my favorites for dinner, poppy seed chicken over rice. More cake and ice cream.
Posted by Peter at 10:05 PM 1 comment:

Why I love Jekyll

After the ordeal of flying for a two week trip with a thirteen month old and getting unpacked, I remembered why I love this place and why I have been looking forward to coming back after scheduling it almost 18 months ago.

Walking from our front door, its 200 yards to the beach. You walk up the steps to get over the dune, and here is what you see. To the left is a lady farther reading a book. To the right a couple of young girls are playing in the waves while their mother relaxes on the sand. The ocean and the beach as far as you can see from 15 feet up on the boardwalk are being shared by these four people and us. We go down to sand to let JBL explore. After soaking in the ocean for 15 minutes we finally spot a couple taking in a walk along the shore, but they are the only other folks. We did see a bunch of pelicans diving for fish, some gulls enjoying the breeze, and those little birds who run really fast and look for little critters in the sand. I am looking forward to coming back tomorrow and not doing much.
Posted by Peter at 9:20 PM No comments:

We traveled south east to the humid metropolis of Houston last weekend to see some friends and stop by Grandma's. Friday evening was spent playing PS3 with Phil until far too late, or early if you look at it from the other side of the clock. Killing baddies co-op is so much fun especially with beer and a good friend.

JBL slept in his tent for the first time. I didn't think it was gonna work out because I basically had to push him in and zip it up before he could scramble out, but after just a few seconds of crying after we shut the door and he settled down and fell asleep posthaste.

Saturday the guys kept the kiddo whilst the girls went to the farmer's market for fixins for pairings with the wine that evening at the Wine Shop @Home tasting that Phil and Heather we hosting. Goatcheese covered bread, stuffed mushrooms, tomato basil salad, cheese fondue, and pecan shortbread cookies came out of the kitchen to pair with all sorts of wines. Yummy and fun.

Sunday we got some kolaches for breakfast and headed up to Katy to see the LeBlond's there including my Memere. None of them had seen JBL since he was itty bitty so they were delighted to see him. He was a little tired and had just gotten up, so it took him a while to come out of his shell. He really took to Jacob immediately and had a blast playing will all of my little cousins. I'm really glad we got to see Memere before she headed north to Rhode Island the next day. There is a chance the rest of the gang might come up for a visit during the birthday party if things work out. We would love to have them come up to see Austin and to enjoy the party. There are more pictures from the visit to Katy over at Flickr here.
Posted by Peter at 9:09 PM No comments:

Cat on a Piano

I will post later about our awesome weekend we had, but this couldn't wait.
Posted by Peter at 9:47 AM No comments:

I find myself from time to time wishing for a place to post to the internets, so I've turned on my blogspot blog. Everybody has an opinion and now I get to put forth my own ramblings to talk to close friends, my family, and the random strangers pointed here by search engines.

Today was one of the best days ever and also a great example of me wanting to let other people know about good things. It was my first fathers day and it was awesome. My beautiful wife got up and took the squirt out early to the grocery store to pick up some yummies for the day and to let me sleep in. She got back and brought me a New York Times which I love to read on Sundays. It has been a long time since we've been able to veg out and read the paper and drink coffee, but she made sure that JBL was tanked up and happy.

She made super awesome pancakes which we discovered in Cooks Illustrated. I don't like magazines much because they are usually bland, stuffed with too many ads, and have stale information, but Cooks is awesome. We love the online subscription as well so we can access all of the recipes online. New dishes are usually made in our house with a laptop in the kitchen.

After reading the paper for a bit we went out to shop a bit. Jess saw a kiddie pool on sale at Target and we wanted to look at other things for summer fun and start looking at getting stuff for the birthday party in August. We ended up buying this pool and it was the absolutely the best $15 spent. I set it up in the backyard and filled it with about 8 inches of water and it was a blast. After the freezing cold water at Nags Head last week, this little blow up kiddie pool was totally refreshing and the squirt had a blast playing for over an hour. It's deep enough to enjoy lounging around in and shallow enough to empty and refill frequently. We all fit in it very comfortably and the water isn't too deep for the little man. We are going to go and pick up a backup pool since this is such a great deal. 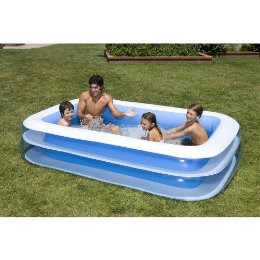 While at Nags Head with the rest of Jessica's family we saw how handy their Dustbuster was at cleaning up around little ones. I started looking into Dustbusters online and thought I was going to pick one up at Target. Jessica was interested in getting a lightweight stick vacuum for the copious dog hair that Shaka leaves for us in the kitchen. We discovered the Electrolux two in one stick vacuum. The link here is to Best Buy but we got it at Target. Oddly the Target site doesn't have it listed at all and the official Electrolux page doesn't list this model, the el1014a at all. As awesome as the web is, sometimes it's still frustrating when things are missing or just ill organized. Anyway, the unit is pretty awesome in that it has a very nice handheld which is also the heart of the stick vacuum. The styling is awesome and everything is very simple. There were other offerings that had a similar idea, but they were all much more complex and had ugly parts sticking out all over the place. This one just feels put together very well and was obviously well thought out with super clean lines. It handled it's initial run through the dog hair very well.

After the pool and playing with the new vacuum we started watching Fever Pitch on HD video on demand. I had heard it was good, but it exceeded my expectations for Jimmy Fallon by quite a bit. I really like Drew Barrymore in most everything she's in, but I was pleasantly suprised by how much I enjoyed this flick. The evening was capped off by a delicious pizza from Yaghi's with pinapple and pepperoni, my favorite.

All in all, I couldn't have asked for a better fathers day. I got to play with JBL, Jessica made great efforts to do all the stuff I like and we all spent the time together. This is my idea of heaven. The best things in life are the simple pleasures and being able to share them with the ones you love. I hope you all get a chance to find your favorite simple pleasures and get to share them with your own special people. Too many people are so focused on what they think is the "big prize" that they miss the rest of life, which is the best part.
Posted by Peter at 10:23 PM 2 comments: